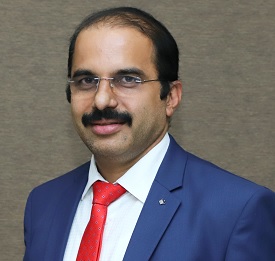 I’m happy to write my first message for the Association as the President, let me begin by wishing you all a happy Ganesh Chaturti and Teachers’ Day. This profession has drawn principles which has revered, celebrated and respected the seniors as their teachers, and I seek their guidance in discharge of my function as the President. I would seek your co-operation and extend my office open to all those who want to seek and suggest the ideas to the Association for the betterment of fraternity.

This year our theme is ‘ACT – Aspire, Connect and Transcend’, the triad in the theme is Aspire, Connect and Transcend. Aspire is to believe in the dreams. The social world needs us to connect, which is the core of anyone’s or an organizations’ success in this dynamic world. We aspire by connecting physically or through common ideas and the resultant outcome is to transcend. The aspiration is an individual choice, whereas connecting with others is for common good, the result is to transcend all in the process.  Igniting element is to Act, which is when the engine starts to roll to transcend.

While Infosys has been put on notice to deliver a glitch-free portal, here are the updates on the direct tax front which kept the Income Tax professionals busy

a Tax dispute settlement scheme, VsVs, that remained in force for over 1.5 years has resulted in 132,353 settled cases (no. of Form 1 filed) involving disputed tax amount of Rs.99,756 crores (as per the declaration filed). The due date for payment of the amount determined in Form 3 is extended to 30.09.2021 (no change in the date for payment with additional amount i.e 31.10.2021)

GST collection for July 2021 stands at 1,16,393crores as the economy is bouncing back to normalcy. The revenues of July 2021 are 33% higher than the GST revenues in the same month last year.

With GST law evolving day by day, it raises a question – When will the positions settle? Delay in setting up Tribunals (after 4+years of GST!) has been the root cause for many to knock doors of High Courts for immediate resolution. Running cost of Pre-deposit for appeal makes writ jurisdiction a natural choice.

While umpteen judgments on levy of GST on ocean freight, interpretation of exemption entries, vires of rules, ITC matching have been favoring the assessees, its immediate application requires a conscious decision making to do. Possibility of these positions to unsettle in subsequent appeal proceedings before High Courts / Supreme Court has a bearing on decision making for business.

Our professional brothers have to be abreast with happenings at Indian Judicial Fora so as to advise clients and help their decision making. Our new team is committed to help members be updated on this front with a host of knowledge series in the pipeline.

On the compliance front, it is good to note that our Government has recognized the hardship in filing returns during pandemic and extending the amnesty scheme for returns from July 2017, with a late fee capping. Government has also addressed the issue of suo motto cancellation of registrations by providing a window for filing revocation applications to revive the registrations.

With clogging of assessment of legacy commercial tax matters, Karnataka Government has extended the time limit under Karasamadhana Scheme.

The Ministry of Corporate Affairs has recently issued the Companies (Appointment and Qualification of Directors) Amendment Rules, 2021. In accordance with the Notification dated August 19, 2021, MCA has amended Rule 6(4) of Companies (Appointment and Qualification of Directors) Rules, 2014 dealing with ‘Compliances required by a person eligible and willing to be appointed as an independent director’. The amendments have the effect of extending coverage of persons who can be appointed as Independent Director without passing online proficiency self-assessment test.

The gist of the amendment is as follows:

Person in the pay scale of Director or equivalent or above in any Ministry or Department (earlier it was restricted to Ministry of Corporate Affairs, Ministry of Finance or Ministry of Commerce and Industry or Ministry of Heavy Industries and Public Enterprises), of the Central Government or any State Government, and having experience in handling,-

(i) the matters relating to commerce, corporate affairs, finance, industry or public enterprises; or

(ii) the affairs related to Government companies or statutory corporations set up under an Act of Parliament or any State Act and carrying on commercial activities.

Following persons having experience of 10 years can be appointed without passing online proficiency self-assessment test:

MCA has amended the Companies (Specification of definitions details) Third Amendment Rules, 2021 vide Notification dated 5th August 2021. In the Companies (Specification of definitions details) Rules, 2014, in clause (h) of sub-rule (1) of rule 2, the following explanation is inserted, namely:- “Explanation.- For the purposes of this clause, electronic based offering of securities, subscription thereof or listing of securities in the International Financial Services Centres set up under section 18 of the Special Economic Zones Act, 2005 (28 of 2005) shall not be construed as ‘electronic mode’ for the purpose of clause (42) of section 2 of the Act.”.

Benjamin Franklin Once said “Tell me and I forget. Teach me and I remember. Involve me and I learn” is a beautiful quote which reminds us of the beautiful system which peaks when we collaborate teach and learn. Tell me is a superficial way of passing the information, whereas teaching and involving are conscious way of passing on the knowledge, which blossoms to all who are involved in the process. Who else knows the benefit of this quote than a CA, who  passes through the stage of learning through involvement.